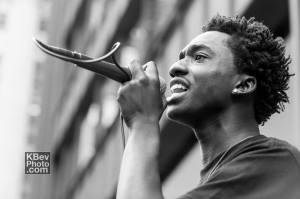 Rapper Ric Wilson states on his website, “No one should be hungry, no one should feel outcast, I believe in a world where everyone is sheltered , fed, sustainable, and free. I use my music to be a mouthpiece for the movement of liberation and to express myself. Some say Activist, some say Rapper, I say Human. Penny Raps 2015.”

This statement sums up the positive message for justice that Ric is bringing to rap. This self-proclaimed “Prison Abolitionist” recently gave an exclusive interview to Hip Hop DX magazine, in which he says, ““I don’t believe in prison and I don’t believe in the culture, the culture that it brings to our society, anything that’s attached to like the menial purpose of having a prison exactly and what a prison culture is,” he says. “A prison culture is a culture that revolves around capitalism. In a world where prisons, people are literally making profits off prisons or people are making profits off targeting certain people to put in prison, a world where like we basically we spend a majority of our tax dollars towards prisons other than education or even health. I call myself a prison abolitionist because I want to dismantle that system.”

The article goes on to say, “The rapper does more than just talk about these issues. He works with local organizations to bring awareness of injustice. Last year, he traveled to Geneva, Switzerland with an organization called We Charge Genocide. They presented a case to the United Nations charging the Chicago Police Department with torture. We Charge Genocide was founded last year after 23-year-old Dominique Franklin was tazed to death in Chicago by a police officer. They seek to give a voice to those who are victims to police brutality.”

But Ric isn’t just an advocate for change and for justice. He has a truly inspired rap style and his music can be life-changing. And luckily, he’s traveling the world to share his message.

Check out some of my favorites, musical and spoken verse: Performing Cops & Robbers at the 2014 vigil for Mike Brown in Chicago; “If I White“; “Lone Pools“; and my most favorite, “Opalescent Soul“.

And check out some of hte press this talented young man has already received: